Recently, I was approached by an individual from the company Different Drummer, a Fan-mobilization agency, about attending a premiere of the movie Furry Vengeance. I took this opportunity and ran with it as I was interested to see how big a role the theme of sustainability and respect for the environment would play in it. Additionally, I was intrigued by the fact that there was a campaign running simultaneously with the release of the film. The campaign, as their website states “will focus on the importance of endangered species and habitat preservation. A customized package including activities and materials, distributed to elementary students nationwide, will engage and educate future environmentalists. It will offer tools and opportunities for students to explore the natural areas of their communities and develop skills and deeper knowledge of habitat and animal protection issues.”


Take part in the campaign and learn more at their website.

So, now, how about a little about the film (without giving too much away)… 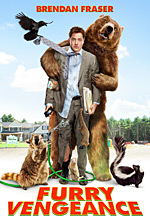 Dan Sanders is a father, a husband, and a businessman working for a green-building company that recently started building a community in the woods so homeowners can experience the beauty of nature. However, the animals are having their homes destroyed and after a beaver dam is demolished, the animals of the forest decide to fight back and drive Dan completely mad. What follows is a series of pretty hilarious incidents that involve Dan getting hurt, embarrassed, or distressed. Oh, and the animals are pretty cute, too!

I had initial reservations about this film, mostly because Brendan Frasier  (Dan Sanders) is not my favorite actor and I try to avoid movies with him in it. I can’t fully explain why this is the case, it just seems to be my reality. Also, I did find myself critiquing the acting while watching the film, which I believe was a bit overdone. But when I left and begin to think about how I would write this review, I realized that I had to put this experience into perspective – this is a movie clearly geared towards very young children, and so overacting or the occasional cheesy one-liner would most likely not phase them, as they were too busy laughing at the skunks hiding in Dan’s car or the bear chasing after Dan in a fit of rage! So, once I looked at the film for what it is, a children’s movie with a green theme, I could appreciate it.

Overall, I believe this movie is a successful family film that did a great job of tackling the themes of sustainability and respect for the natural world while simultaneously making the audience (especially the kids) laugh. Knowing how many animals habitats are taken away each year, there is something particularly enjoyable about watching these little creatures get back at the man who’s taking their home away. So, if your family is interested in going to the movies anytime soon, I suggest checking out this film with your children – you may find yourself laughing a bit, too!