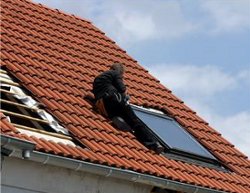 Here are some guidelines to prepare for the inevitable replacement of these systems:

Introduction. Because congregations are non-profit organizations, they generally do not pay taxes. As a result, leaders have little incentive to set up depreciation schedules for their various systems. Still, congregations must face the inevitable replacement of heating and cooling systems, the roof, the exterior paint and sometimes the electrical and plumbing systems
To address these issues in a systemic way, congregations are encouraged to create a maintenance reserve fund; the same type of fund that the business world uses to be eligible for depreciation under the tax laws. The fund enables congregations to create a long-range maintenance plan, as opposed to reacting to emergency situations.

Initial funding. There are at least two ways to start a replacement reserve fund.
1. A replacement reserve fund can be started immediately after the purchase of a new system, roof, or entire building. The congregation calculates the life expectancy of each component and creates a line item in the operating budget that is equivalent to the annual amount needed to replace the system.
2. A replacement reserve fund can be created as part of a capital campaign. Most congregations do not include depreciation money in their annual operating budget. As a result, the initial funding is often provided as part of a capital campaign.

Annual Funding. Whichever of the two methods is chosen, the key to success is the annual appropriation to the replacement reserve fund. The annual budget should include a line item for depreciation equal to the decline in the value of the depreciable assets as calculated according to the General Accepted Accounting Practices (GAAP). We recommend that money should be deposited in a separate account that already contains the initial funding and held until approved for expenditure. Interest accruing on the funds should be held in the same account.

Adapted by Wayne B. Clark from a document written by David L. Rickard